An archeological find at the Hill of Jonah near Ashdod may prove that the area had been occupied during the time when archeologists believe Jonah the prophet walked the Earth.

Archeologists have discovered the remains of massive walls, possible the remains of a fortress, that were dated to the late eighth and early seventh centuries BCE, the Israeli Antiquities Authority announced on Monday.

The find is significant because the discovery of life at the site, which is traditionally the landmark site for the tomb of Jonah for both Muslims and Jews, indicates that there was human activity at the coastal hill during the time of Jonah.

Excavation director Dmitir Egrov estimated that the fortress likely stood on the hill overlooking the glistening Mediterranean sea during the First Temple Period. Jonah, who is believed to have lived in the eighth century BCE, was active during this same time period, according to Egrov.

Sa'ar Ganor, the Ashkelon District Archaeologist of the Israel Antiquities Authority, said that the occupying power at the time would have built a fortress on the Hill of Jonah because of its strategic location.

The hill rises some 50 meters above sea level - the highest hill in the area - and probably looked out to an ancient port and Tel Ashdod, according to Ganor.

Ganor said either the Assyrians or the kingdom of Judah probably developed the area.

The find joins a previous discovery in the adjacent area, which was excavated before the construction of the modern Ashdod lighthouse. There, similar wall remains dated to the First Temple and Persian periods were inscribed with an Aramic phrase apparently denoting a financial, religious offering. 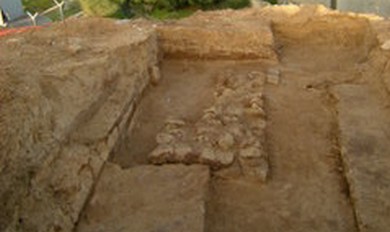